With this simple recipe and detailled instructions, your bread dumplings (Semmelknödel) will be a success and not fall apart when shaped and cooked.

Further down in the article there are all the bread dumpling tips from my Viennese Grandmother and the detailled recipe.

Making bread dumplings at home is not difficult, and above all much better than buying them.

I like them with roast pork, with roast goose, beef goulash or a pan of cooked lentils with onions. Bread dumplings also go very well with smoked meat and Sauerkraut.

Leftovers of bread dumplings taste super yummy when roasted in a pan with onions, bacon and eggs. (You can even toss in some of this leftover short pasta or potatoes and call the dish a "Grenadiermarsch")

Bread dumpling mass is too sticky

If the uncooked bread dumpling mass does not hold together well, it might be either too wet or too dry. An additional egg provides more binding, when too dry. Mix the mass again very well with your hands so that the egg is evenly distributed. Then let it rest for 10 minutes.
If the mass is very sticky and wet, add breadcrumbs and mix in until it no longer sticks on your hands. 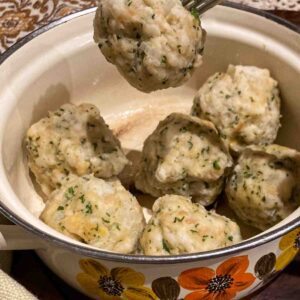 Goes well with roast pork, roast goose or even a Jägerschnitzel, goulash, mushroom sauce or lentil sauce. Bread dumplings also go very well with smoked meat and Sauerkraut. You can find frequently asked questions and tips about the bread dumplings in the blog post above.