My mother in law not only bakes wonderful cakes (see black forest cake recipe), she also cooks very good soups and stews. This stew with potatoes, vegetables, bacon and sausages is one of her "classic" recipes that she prepares very often when we visit her. (Directly to recipe)

The recipe for this stew is hearty, simple and does not take too much time to cook. Perfect for a cold and rainy saturday in october. 😉

If you wonder why the pictures are shot outside, on an obviously sunny day... Yes I have to admit, I made them a few weeks ago, when it was still hot! 😉 Nevertheless, this stew is perfect to lighten up your mood on a grey autumn day 😉

I would recommend some fresh bread as a side, for example some Homemade Onion Baguettes with wholemeal spelt flour or a Tyrolean Farmer's Bread.

Like with most other stews, the basic priciple is pretty easy: chop small all of the ingredients and cook them.

My mother in law also adds some "Nockerl" to the stew. They're made only out of flour and water, but taste really fantastic! I especially love their texture. If you don't know what Nockerl are, just try it out! Here is a youtube tutorial on how to make them. It's in german, but you don't need the audio instructuions necessarily, just watch it 😉 .

Also is it very easy to modify and change the recipe. You can, for example, add some other vegetables, leave out the sausages, forget about the "Nockerl", add champignons, and so on. 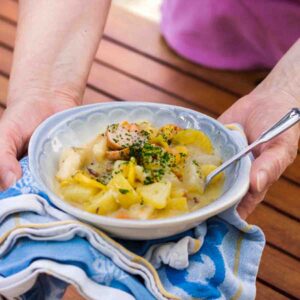