Stuffed peppers with ground meat, rice and tomato sauce are a classic of Austrian cuisine. This version is a bit faster and easier to prepare than the traditional version. [Directly to recipe]

What sets this recipe apart from the traditional recipes for stuffed peppers?

So much for the traditional Austrian stuffed peppers recipes:

In most traditional recipes for Stuffed Peppers, the peppers are left in hot water for 10-20 minutes to soften them. Then they are stuffed with the still raw ground meat and baked in the oven. Only then is the tomato sauce added.

That’s how my grandma does it:

An alternative version from my granny is the preparation in the oven, without pouring hot water over the peppers in the first time. The peppers are stuffed with the raw ground meat mix and baked in the oven until the meat is through. Only then comes the tomato sauce. By roasting in the oven, the peppers get a very good taste, but it also takes longer to finish.

My quick version of the recipe:

My version of the recipe is for the impatient among us. The meat is fried in a pan beforehand, which shortens the cooking time. The stuffed peppers are then cooked in the tomato sauce on the stove top.

For the sauce I use ready-made plain tomato sauce. Because especially in the wintertime, the Austrian tomatoes taste like nothing anyway and therefore the effort to make it from scratch is not worth it. 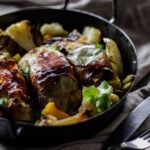 Here is a longer pic to pin on your Pinterest Boards:

And here is the recipe for stuffed peppers:

Warning: Trying to access array offset on value of type bool in /home/.sites/347/site4715130/web/wp-content/plugins/wp-ultimate-recipe/helpers/models/recipe.php on line 254
Rezept drucken
STUFFED PEPPERS WITH GROUND MEAT AND TOMATO SAUCE
Stuffed peppers with ground meat, rice and tomato sauce are a classic of Austrian cuisine. This version is a bit faster and easier to prepare than the traditional version.
Ingredients
For the peppers
For the tomato sauce
Instructions
Powered by WP Ultimate Recipe